Reading Anthony Esolen’s book about children and imagination reminds me of a story that happened during my first year of my Master’s degree program. I was just starting to get over my “deer in the headlights” feeling of being a student in a Master’s program, and I was really enjoying my new class on some fantasy author named George MacDonald. At the time I didn’t know who he was, but I heard something about how he wrote fantasy (which I liked) and was admired by C.S. Lewis and J.R.R. Tolkien (whom I also liked). So, I thought I would give him a shot. Little did I know that three years later I would be putting the finishing touches on my Major Essay on George MacDonald’s writing–but that’s a story for another time.

When I started the class, I was one of two Master’s students in a class full of undergraduates. The class read many wonderful and enchanting stories by MacDonald; none that I liked more than his fairy tales and The Princess and the Goblin. The class assignments were pretty straight forward: one presentation and one essay. Now there is one thing that is for certain when it comes to undergraduates and presentations: they will be over-the-top to the point of silly in their performances (wear costumes, turn off the lights and light candles, play dramatic music, etc), and they will bring snacks for the class. Of course, I never minded the later distinction, but walking into a dark candle-lit room to watch a group of 4 undergrads fumble through an 20 minute explanation of Lilith (in costume of course), grew old. Now, this may sound fine and well–and indeed, the groups obviously spent a good amount of time organizing lines and gathering costumes–but there was nothing that was terribly imaginative about how the students interacted with the text.

I don’t want to sound pompous. I could insert a story here about how I totally botched my first presentation about Owen Barfield, especially after I rambled on for 5 minutes trying to answer another student’s question only to later have to stop and say, “actually, I don’t really know.” Trust me, I really wanted candles and cookies at that moment.

What I started to understand during those candle-lit moments on the second floor of classroom 233, is what I would later hear my advising professor tell me: “one of the worse things you can do as a teacher is teach a creative novel without any creativity.” In essence, it wasn’t good enough to be creative in how I taught, I needed to be creative in what I taught. This would require a good amount of imagination on my part, which of course leads me to the second thing I learned in that class:

It’s important to define terms: in this case the word “imagination.”

My presentation to the George MacDonald class went well enough. Although, truth be told, I’m not sure they understood what I was saying because I had the lights on and I wasn’t wearing a cape. Plus, I didn’t bring any cookies (academia can sometimes make teachers stingy with their pastries).

After my presentation I cornered the professor on her way back to her office and politely asked her if I could do my essay for the class on “imagination.”

“What do you mean?” she responded.

“You know–imagination. Like, the way George MacDonald uses imagination,” I nervously answered.

After a long pause, she gently and politely told me that the topic was a little too big for a 20 page paper. It didn’t take me long to figure out how right she was.

After completing my George MacDonald class, I was thoroughly entrenched in uncovering the meaning of imagination. Here is what I found… 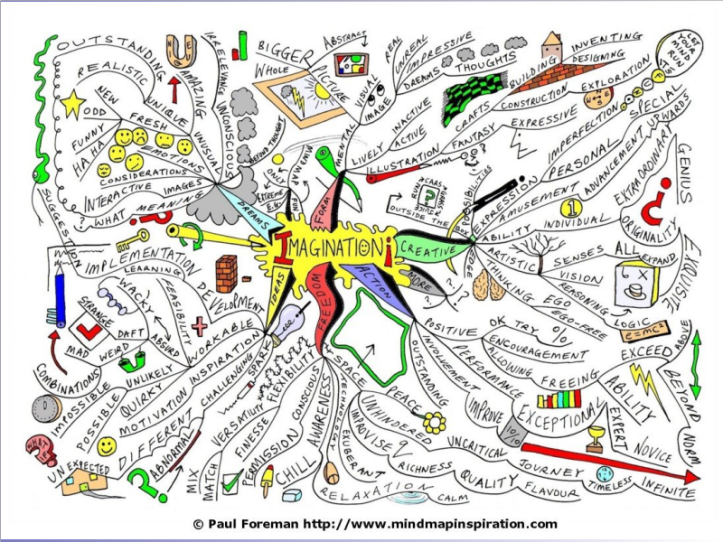 The problem with the word “imagination” is that it has as many different definitions as the number of people that you ask. Imagination is anything from The Last Unicorn to Clockwork Orange–from drawing architectural blueprints to cloud gazing. It’s no wonder we are somewhat skeptical of imagination while whole heartily nodding in agreement with its promotion. A person using his/her imagination can be anything from a “daydreamer” to a “visionary.”

When I ask my students to define imagination they often describe something that sounds like a hidden power in their minds that they can access when they need to write stories or read books. To this I respond, “yes.” Indeed, that is imagination, but how can we reconcile the unicorns of imagination with George MacDonald’s definition that says imagination “is the faculty which gives form to thought.” I would like to present what I think is a practical working definition of “imagination.”

Imagination–from Latin imaginationem, a noun of action from imaginari (“to form a mental picture of, to form an image of, to represent”)…Old French imaginer means to “sculpt, carve, paint; decorate, embellish.”

Imagination is the activity of a person creating mental images that her/she then refers back to in order to make sense of or give meaning to a situation.

Imagination isn’t some mystical enchantment that some people have and some people don’t (although, like a muscle, imagination can be built stronger), but it’s a set of images that we recall when we think of someone or something. It is the process of logging images, recalling those imaging, and acting according to those images.

When I say the word “tree” you recall some type of tree in your mind. Congratulations, you just used your imagination! The League of Justice for Equal Treatment for Imagined Trees might be the only people who care about what kind of tree that pops into your mind, but what if I say words like “racism, goodness, and evil.” The images that pop into your head suddenly become much more important. A person’s imagination regarding topics like humanity and God are incredibly important if we believe that what we imagine in our minds has great influence over how we act. Thus, if we want to change how we act, we must first change how we imagine something. In essence, a “reimaging” must occur for there to be long-lasting change.

How does this happen….

“Reimaging” takes place in a variety of ways, but personal experience and emotion are always present in the most powerful memories and images of our minds. Yet, our personal experiences are limited by time and money and ability (among other things). I believe that there is a exceptional tool that can help “re”shape our imaginations, and that is Art.

If the Old French definition imaginer means to “sculpt, carve, paint; decorate, embellish,” then isn’t an artist simply one who shapes our imagination in a way that gives us images about the world?

I believe that one of the most effective tools for guiding or reshaping a person’s imagination is Story. This is why C.S. Lewis claimed in his autobiography Surprised by Joy, that the fantasy of George MacDonald baptized his imagination. Story is powerful. We wield a great sword of imagination when we write, and we submit to the great process when we read.

I don’t miss all of the undergrad presentations, but I do miss engaging in meaning conversation about George MacDonald and the benefits of fantasy. And of course, I miss the cookies too.

“For now we see through a glass, darkly; but then face to face: now I know in part; but then shall I know even as also I am known.”–1 Corinthians 13:12